First trip out on kayak -will have to wait. 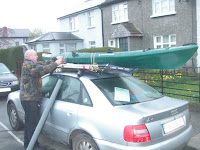 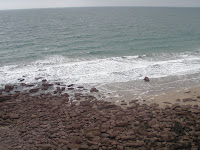 Well the long awaited alarm rang 6.00am i decided to ease my self back in to the bass fishing steadily and not a 4am start.We had decided to head to wexford and as some lads had their own special spots we had a meeting point picked [Wellington bridge] and the time 9.30am.As usual i was late and the others just wanted to fish so off they went .We were well spread out over a big area and the phones were hoping with all kinds of text and pictures ,but all the same news no fish. 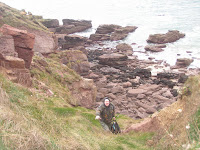 We got to our venue and the water was clear but a good east south east wind blowing dejected was how i felt as i wanted to get the kayak out for my first trip of 2011.A quick move to a new venue and we were all gearing up with a lot of what Santa had stuffed down the chimney .All sorts of new rods reels and hard and soft lures new lines braid was what most lads seemed to have .Some of the lads using braid for the first time  needed to get the knots right .A good bit of banter was had wile we were setting up and the expectations were high we headed off and before long the merry group was tinning out as some lads doped down to likely looking spots that they fancied dipping their shiny new lures in to .
I headed along the track to near the far end of this mark and what was left of our merry group got down to what we call geriatric rock as it gives the not so mobile angler room to get to the fish. I made my way along the shore picking a nice flat rock with the wind on my left shoulder and looking across a nice bay full of rocks with sand patches you know the ones as their are the same bassie looking spots in everyones home patch.
The 2011 bass season was about to begin the big choice what lure to go for my mind was made up very quick and out came the feed shallow, on it went and that magic sound the click that comes from the feed shallow when you swing it behind your back to launch it to the waiting bass.It felt like i was standing on the starting line of a race and the gun sounded to let us launch our lures to open our account for 2011.
I worked my lure and covered all the bay following the clock around and then going back around anti clockwise to make sure i missed no bass that might have had his head down and was not looking to the sky to see my lure going by.This continued for a few hours and their was no fish showing moving along the shore and covering the places were i had caught bass in years gone by .And no mather what lure i tryed i just could not get my bass account opened the phone was bring in the same news from the other lads then i got a text to say it was time to move to plan b the estuary were we might get a fish of some sort to pull on the line in the plan B box their was crab lug and razor and some sea trout lures . 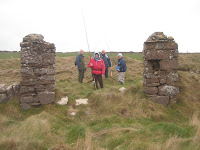 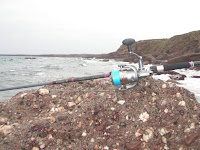 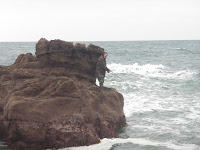 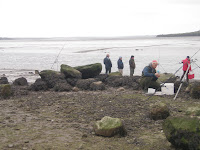 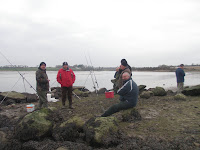 So back to the car lunch had and a short drive to the place i have had a lot of bass in the past on bait and lure with the odd trout for to keep you inserted.Most opted for the bait but i held out hope of that first lure bass, but i wanted , i needed to catch something for my day.Bait out lure in i wanted a fish we flogged it for the rest of the day but no mather what we tried the gods were not opening the season for us and at 6.00pm we decided to call it a day and head to the only place we were going to get fish that day PJ's diner in Oil gate on the way home to Dublin fish less but all ready making plans for the next Irish bumble looking at tides and dates and making plans while eating out fish supper,stop the press all was not lost and the other lads saved the day with a sea trout them Wicklow lads can smell them out .Great stuff lads even though we did not meet we shared a great day together in search of billy bass .
Posted by Dave Tilly at 1:01 PM

Dave Tilly
Dublin 4, Leinster, Ireland
My family have been gathering bait for the last 50 years. I Have been fishing all my life and climbed the hights of the shore angling scene falling in love with bass fishing. I now make a living doing what i love, digging bait and guiding!

If you sea anything dodgy on the shore or anywhere near rivers or lakes ring.1890347424 .or for the coast re pollution ring 999 and ask for the coast guard .MAKE THAT CALL. Its our sea.
sea fisheries protection authority 1890767676