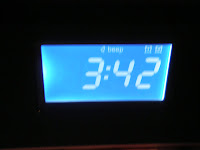 Well it has come around again the start,the early mornings on the road
and the no sleep nights tinkling of the lures the gear not to be forgotten and the venue ,wear to fish what to use i think we all turn this over in our heads or is it just me.
You can see the clock and yes that is am we had a two and a half hour drive thanks to the new roads we can get to places a lot quicker now in Ireland.We met at the pier or slip way in dungarven the air of will we catch the bass was going around,the mullet swimming in the shallows helped this, the reports up on forums of fish been landed on lures on land and kayak was the talk as we got our kit ready.
Their was 10 of us 5 on the kayaks and the rest on the shore.Clonea beach and then to another beach for low water.
The kayak lads headed out into the channel and the hunt for the bass started as we all wanted to open our bass account for 2011.The got up and coming from the east it cooled the air out of the wind it was like summer and some of us even got some sun [sun cream back in the box] With a small chop on the water wind against tide the 2 new lads headed in to fish on the shore to catch the low tide.Next time Joe and Eamonn  Stephen rang me to tell me that he had missed a bass on the plug and seen a few swimming around the oyster cages.He gave it a good go and no more hits or signs of fish so Stephen headed in to fish with the shore crew.
Myself and Mick stuck with it we had padded across the bay to the lighthouse and made our way along the back of the golf club we covered all the bays rocks and them bassie looking coves that are saying we are hear.But no bass. 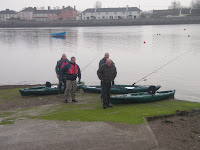 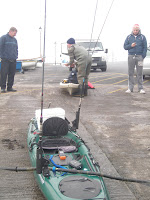 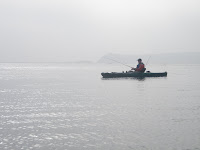 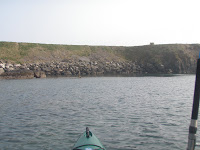 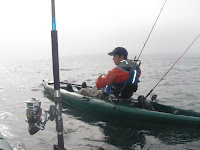 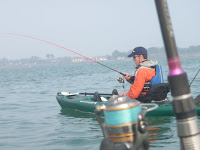 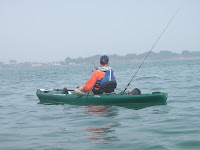 First fish on a nice sea trout for Mick it did not like the color of his kayak i think so he hoped of .But it was not long till that small zonk was in action and Mick was grinning first kayak trout.I had a few on and they did not like my kayak so they are swimming for another day. 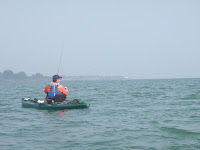 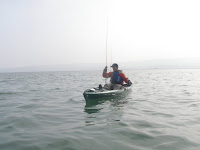 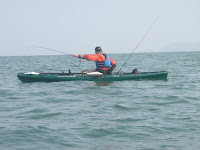 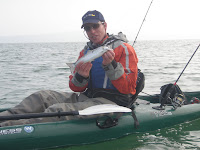 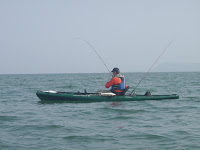 Happy camper and the blank saved but as Mick says no substitute for the spike lads. 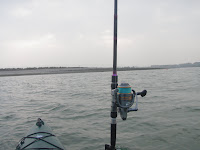 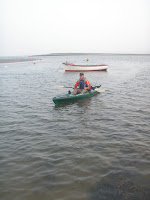 That glide in to the shore at the end of the day is a great feeling it marks the end of another day and the plans to be set for the next one.The shore crew got 1 bass and a few flats dogs and a codling.May be the east winds turned of the fish .

We headed home and on the way down the new road to Waterford some yob threw some eggs from the flyover down on my car and smashed  my windscreen and gave me and my passengers a fright sorry Bren and Danny,i hope the Garda get them pass on the word for to watch out in this area as the toll people said it is happing a lot.We all got home safe and sound and will be on the hunt for that first bass soon. 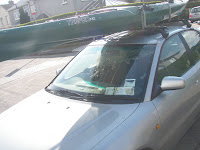 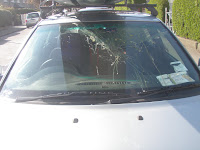 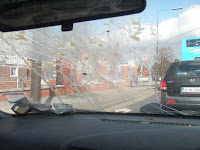 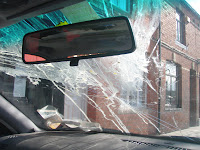 Dave Tilly
Dublin 4, Leinster, Ireland
My family have been gathering bait for the last 50 years. I Have been fishing all my life and climbed the hights of the shore angling scene falling in love with bass fishing. I now make a living doing what i love, digging bait and guiding!

If you sea anything dodgy on the shore or anywhere near rivers or lakes ring.1890347424 .or for the coast re pollution ring 999 and ask for the coast guard .MAKE THAT CALL. Its our sea.
sea fisheries protection authority 1890767676